Dish of the Day: Mee Rebus 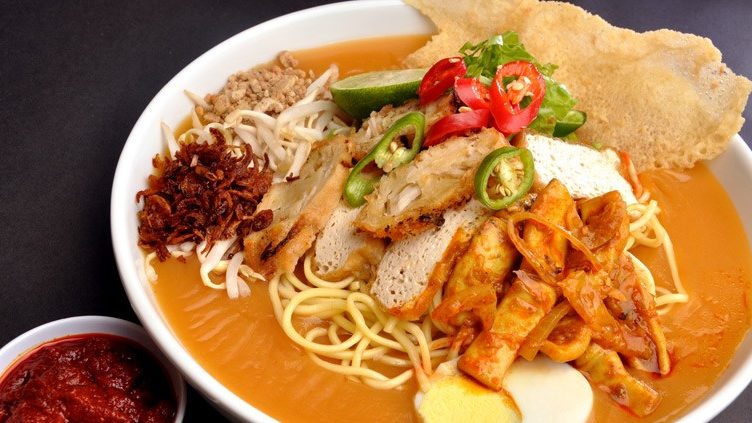 Mee Rebus is one of the most classic traditional Malay dishes. It’s a hot concoction of well-balanced herbs and spices broth with soft and chewy noodles. Best enjoyed during a cold day and even when you have a cold yourself. The dish can be found at any Malay restaurants around Malaysia.

What is Mee Rebus?

The word “mee” is noodles in Malay, while “rebus” refers to boiling. So, Mee Rebus is just boiled noodles. The hot broth is poured into a bowl of noodles before being topped with garnishes like tomato and fried shallots. Chunks or strips of chicken meat are added to give some protein and enhance the base flavour of the broth.

“Mee Rebus” is a method of preparing the noodles, but the dish presents itself in variations. Mee Siam is a type of Mee Rebus and is said to have Thai influence. Some even say the origin of the dish is Malay or Peranakan.

Mee Siam is Malay for Thai noodles in which the name has been used during World War II. Some argue that the name was inspired by Thai flavours, as the flavours and ingredients used to make Mee Siam is similar to Thai coconut rice noodle dish and Mee Kati.

The topic of whether the noodle is of Malay or Peranakan origin is highly debated. It is said that it is an innovation of the Straits Chinese Nyonyas, hence exclusively Peranakan.

A food critic argues that the dish is from Penang, where the cuisine is influenced by many cultures. But the closest similarity to Mee Siam in Penang is Mee Kerabu. While others settle that the dish is a hybrid of all three cultures.

Mee Rebus is street food, and back in the days, hawkers would carry two baskets hang on each side of a pole. One basket contained a stove and boiling water while the other is filled with the ingredients to make the dish, similar to how Nasi Kandar was sold in the street of Penang.

But now the dish has made its way to restaurants and even hotel dining halls for the tourists to have a taste of the wonderful varieties of Mee Rebus.

Even though it is not considered to be a national dish, the dish has its very own fair share of popularity among Malaysians. Different places have different takes on how the dish is like. As mentioned earlier, there are tons of varieties of the dish.

Taking the example of Mee Celup and Mee Rebus Johor, both are similar but distinct in style. Even though both use yellow noodles, the noticeable difference is the broth. One uses chicken stock to give flavour while the latter uses beef and has a much thicker consistency.

The variations of noodles are what give the dish a wow factor because you might have an idea of what the dish is but not necessarily get what you have in mind.

Mee Rebus is an easy find, just walk into any Malay restaurant, and you are sure to find it in the menu. Try it from Mee Rebus Hj Wahid (Shah Alam ) that serves the original version or with bone broth. If you like crabs, get the Mee Rebus with crab broth from Kedai Mee Rebus Kuah Ketam Pak Sharif (Penang).

Find more of the Malay cuisine on foodpanda!

You can also read more about other Malay mee dishes like the Mee Goreng, or Mee Bandung on our website!